You can sit there expecting the world of God but that doesn’t mean God is going to turn up. Often in response to your doing nothing you’ll find God also does nothing .

This can be profoundly frustrating, especially when you have been looking forward to this time of silence and doing nothing and were really hoping God would turn up. This is the heart of what Mystical Spirituality is. However to really get the most out of silent prayer you have to continue through this frustration. Push through the barrier that tells you to give up and the boredom that says there are a hundred and one other more pressing, things to do with your time. You have to persevere through the point that says nothing is going to happen.

Because then, suddenly something does happen.

Once you’ve hit that sweet spot of silence and waiting there’s only one other thing that I can think comes close to describing it.

That of the submissive waiting for their Dom/me.

To sit and wait in silent prayer for God to act is akin to the submissive who has been ordered to sit in position blindfolded and wait for their Master to come back.

This extra level of obedience during prayer was what made it all the more tantalising. There was the rush of doing what I was told mixed with the anxiety of getting it wrong, disappointing God by not being obedient and leaving before She was done with me or worse the out right fear that I would fuck it up by not paying attention. Like the Foolish Brides Maids in the Gospel of Matthew there was a danger that if I was not attentive to my Dominant I would miss it when She returned and be left out in the cold.

This obedient silence in the dark had me catching my breath at every sound, waiting for any sign that God was coming back….

Then something, like the heels of knee high boots clicking on the cold floor I began to sense a presence coming nearer. I shifted my wait anxiously straining my ears to hear. My skin became electrified just like the sub as they wait for the first crack of the riding crop or burst of electricity. The wait was unbearable… wanting to scream but knowing this was not allowed I almost lost hope.

I’d love to say that God then came down on me with all the force of a rushing wind. But She didn’t. Just like the dominant who has left her submissive waiting anxiously for what seems like hours, God some times simply comes close and instead of striking, gently caresses, smooths, feels…..

It’s ok when this happens though.

There’s no need for every touch to be one of intense and searing heat. Often the gentlest touch can be the one that sends us wild.

It’s the waiting that causes our contact to be so explosive and volatile. The longer we wait the more explosive it is. Some times our prayer life can be like this. We wait patiently for hours, months years and then BAM out of nowhere we have the greatest, most intense experience of God of our lives! This is something the great Christian tradition often testifies to. 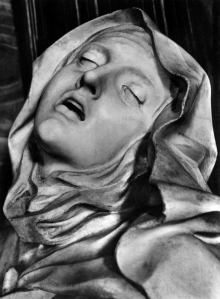 Teresa of Avila is famous for her orgasmic like experiences in prayer.

Though what she learnt through this was that not every experience of God need be as powerful or overwhelming. After having this high octane experience she realised that she would never be satisfied. Her desire for this orgasm of prayer would continue and grow and eventually overwhelm her in a mystical lust for prayer and Divine interaction. Just as the submissive waits and desires more and more from each exchange we too can be like this with prayer and God.

Not only that but God is the infinite One. The One we can not possibly conceive fully of, let alone experience all of. Trying to satisfy the lust for something that is infinite will itself turn out to be an infinite task it self. It is impossible for us as finite beings to become satisfied with the Infinite Being. So we must avoid becoming consumed by this lust for the Infinite.

Teresa discovered this after her great prayer experiences. She realised that God could never be fully attained, and so to desire constant interaction was folly. What she did instead was refocus her desire to the act of desiring itself. She turned the act of lusting after God into the very thing to lust after. To lust after God is a fruitless endeavour that will always leave us empty and unfulfilled. Instead we should lust after our DESIRE for God. This is a desire that can always be fulfilled and will always be satisfied whenever we ask for it. For who can not fall into desire for something whenever they feel like it. The trick is to find satisfaction in the very act of desiring itself, not in attaining the impossible which we desire for.

In our prayers we need to be more content with asking God to cuff and blindfold us and just leave us content to wait on Her, whether she comes back with her crop or not.

The painting for this blog post is by the wonderfully talented Ruben Alternative Art who is a close friend of mine and has done some personal art work for me, go check her out!

Born in the wrong era. And gender.

See below for my most popular posts: